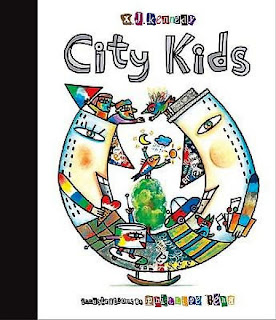 This is an honor book for the Lion and the Unicorn Award for Excellence in North American Poetry in 2011:

Here is a Readers' Guide by Brienna Ayers.

Summary of Book: City Kids is a collection of poems focused on the places, people and experiences one may encounter in a city. Kennedy creates poems about the places one may visit in a big city like the San Diego Zoo, a Laundromat or a deli. There are many poems about people one would experience like a man passing out leaflets, a man at a chestnut cart, street performers, fireman and even the perspective of a dog. This collection of Kennedy’s poetry focuses on the diversity of life in a city. There is even a poem specifically about the importance of diversity in life.
Review Excerpts:
"There is plenty of child-appeal and perspective, as well as end rhymes, internal rhymes, and alliteration to catch the fancy of young listeners. The layout sets each poem opposite boldly outlined images that channel the animated whimsy and unexpected colors of Chagall.... Recommended." (Library Media Connection)  "

Kennedy is thought-provoking without being obscure. Although much of his work is light and whimsical, he shows a willingness to take on more serious subject matter...The book also benefits considerably from Montrealer Philippe Béha's colourful, stylized illustrations, which interpret the work sensitively and creatively." (Quill & Quire)

"Captures the scenes and experience of urban life, via a series of evocative poems and illustrations...It is well written and expressed and invites children to understand the urban environment through a wide variety of images...A great anthology for the urban classroom, as it celebrates the life and culture of city kids." (Resource Links)

"The urban world is examined from every angle in this lively collection of verse about city life Béha's illustrations have a naïf, crayon-scrawled exuberance, and most match the upbeat tone of Kennedy's verse." (Publishers Weekly )
Awards/ Honors Received:
X.J. Kennedy is the winner of the 2009 Robert Frost Medal awarded by the Poetry Society of American for a distinguished lifetime of service to American Poetry.

Phillippe Béha is the two time Governor-General’s Award-winning illustrator of many children’s books.

*Both have received many other awards for their work in Children’s Literature.

Questions to Ask Before Reading:
• Ask students what makes up a city-what kinds of things are needed (taxis? skyscrapers? etc.)
• Ask students to name some of the big cities they can think remember.
• Ask students to share about a time they lived in or visited a big city.
• Ask students to identify what makes a poem? (layout, rhyme scheme, etc.)
• Ask students what kind of things would they write about in a book of poetry about the city? Is there anything they think has to be included in a poetry book about a city?
Suggestions for Reading Poems Aloud:
• Allow students to volunteer to read the shorter poems (“hoop haiku” or “Where Will We Run To” would be good choices) or do a round robin with students reading every other line. This keeps the student’s attention on the material and provides practice with their oral reading skills.
• Read a title (“Aquarium” would be a good choice) from the collection and have students guess what the poem will be about or read the poem aloud and have the students try and guess what the poem is titled/ about.
• Separate the titles, poems and images (use some of the simpler poems like “Leaflet man” or Subway trip”) and divide the students into groups. Each group is given several of these divided poems and are tasked to match the correct title, poem and image.

Follow Activities:
Writing:
• Have students create poems about things in their neighborhoods and people in their lives. Poems could also be about other areas of town and people they have observed.
• Have students select 2-3 poems from X.J Kennedy’s collection and create a story that includes both concepts. For example, if they chose a poem about school and a poem about diversity they could write about diversity in a school.

Art:
• Have students create a collage of the images found in the City Kids collection of poetry.
• Have students divide into small groups. Have them interview each other and create poster sized diagrams featuring the similarities and differences (a Venn diagram would work well)
• Have students illustrate their poems about things in their neighborhoods and people in their lives.

Social Studies:
• Have students find the locations of the cities mentioned in the collection of poetry or other similar big cities they can think imagine. These cities can be marked on the map and the class can discuss the growth of cities as well.
Relate Websites:
X. J. Kennedy’s website:
http://xjanddorothymkennedy.com/

Posted by Sylvia Vardell at 7:20 AM 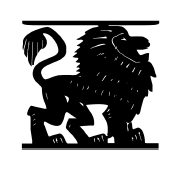 The Lion and the Unicorn Award for Excellence in North American Poetry focuses on North American poetry for young people and carries on the prior tradition begun by the British journal, Signal, to “instigate, provoke, and sustain a conversation about poetry published for children.” Recipients are now from both the U.S. and Canada. In addition, the Lion and the Unicorn Award includes an essay which discusses the award winners as well as speculates on issues unique to writing and publishing poetry for children, “painting a picture of that year in children’s poetry.” You can generally find those thought-provoking essays in Project Muse, a digital resource of journals in the humanities and social sciences.

This site was created by Sylvia Vardell and is not an official site of the Lion and Unicorn Award. Contributors include librarians, teachers, and students who want to promote the award and honor books as well as poetry in general among children and young adults.